All About GSTR-9C Audit Checklist

What is GSTR 9C (GST Audit Form)?
GSTR 9C is an annual audit form for all the taxpayers having the turnover above 2 crores in a particular financial year. Along with the GSTR 9C audit form, the taxpayer will also have to fill up the reconciliation statement along with the certification of an audit.

SAG Infotech is here to provide all the relevant details of GSTR 9 and 9C form and step by step procedure to file them along with the screenshots. The GSTR 9C form has a reconciliation statement for reconciling turnover, input tax credits and tax payments. The taxpayers can also view and download the GSTR 9C form in PDF format.

“GST council relieved the MSMEs to furnish reconciliation statement in the form GSTR 9C for FY 2018-19 for aggregate turnover of INR 5 crore.”
“Reconciliation Statement and annual return for financial year 2018-19 due date extended till 30th June 2020”. Note: The last is extended by government of India till 30th September 2020
“Annual return and the Reconciliation Statement for financial year 2017-18 and 2018-19 late filing penalty waived off for the taxpayers having turnover lower than Rs. 2 crores. Read Official Press Release“

While doing the GSTR 9C audit, the following points have to be verified

If yes, whether interest paid or not.? Whether the taxpayer claimed any ineligible credit.?

In the case of common input, whether Rule 42 and 43 are followed or not.?

In case the taxpayer is supplying exempted goods, then whether ITC on purchase of goods or services for such supply was reversed or not In the case of FY 2017-18, whether the reverse charge was paid till 13-10-2017 under section 9(4) or not Is there any reverse charge invoice in GSTR 2A(besides this, books also to be verified to know whether any supply was there on which GST has to be paid under reverse charge) and whether the taxpayer had paid the same or not

In case of any mistake in GST returns, whether the same are rectified by amendment or not.?

If rectified, then in which month and scope of interest on the same Is there any other income in income tax return other than those specified in GST returns.?

If yes, then taxability of such income in GST Is there any demand raised against the taxpayer.?

If yes, then whether the same was solved or still pending and the effect of such order on GST returns Is there any consideration received for the disposal of business assets.?

Whether any advances received?

If yes and if the intended supply is service, then taxability of such advance.

In case, GST was paid in the month of service provided then interest in delay between the months of advance received and GST paid. Verifying the valuation rules wherever applicable

Simplify GSTR 9C Filing by CBIC
Some exemptions has been done in this form listed below:

Part of turnover adjustments necessary in Table 5B to 5N is now not mandatory and all the adjustment now necessary to be described in Table 5O;
Table 12B, 12C and 14 (ITC reconciliation) are now not mandatory;
Few changes are done in the Declaration part also.
What is GSTR 9C Annual GST Audit Form?
As per the rules, all the taxpayer will have to file an annual return form with GSTR 9 but now in an addition to the current rule, Section 35 of CGST Act, 2017, all those taxpayers having turnover exceeding 2 crores in a financial year will have to submit audited annual accounts along with a reconciliation statement in GSTR 9C form.

Who is Required to File the GSTR 9C (GST Audit Form)?
All those taxpayers having the turnover above 2 crores in a financial year are required to file GSTR 9C form along with the reconciliation statement and certification of an audit.

Latest News/Updates of GSTR 9C Form
“Election Commission as per the Model Code of Conduct and Government obtaining due clearances extended the due date for furnishing Annual Return in GSTR-9 and GSTR 9C for 2018-19 from 30.09.2020 to 31.10.2020”. Read notification no. 69/2020
CBIC officially announced the due date extension of GSTR 9C from till 30th September 2020 for FY 2018-19
“The institute of cost accounts of India has requested to the ministry of finance for not increasing the threshold limit of GST Annual Return & Audit form.”
“The council extends the due date of GSTR 9 and GSTR 9C till 30th June 2020 from 31st March 2020 for the FY 2018-19. Also, the annual return filing turnover limit extended to 5 crores from 2 crores.”
“GSTR 9 & 9C filing for FY 2018-19 has live on the GST portal but in table 8A of GSTR 9 auto populate ITC as per GSTR 2A function is not working.”
GSTN recently stated the figures of eligible large taxpayers filing the annual return form GSTR 9 annual audit and form GSTR 9C coming to average 91% and 92% respectively till 12th February 2020.
The GSTN recently issued a clarification in the Auditor’s Certificate issued in Part-B(ii) of GSTR-9C (Reconciliation Statement). As per the statement issued it mentioned, “A minor issue has come to notice in auditor’s certificate issued in Part-B(ii). The issue will be fixed shortly. In the meantime, where Part-B(ii) of the certificate is not applicable i.e. auditor preparing GSTR-9C has also conducted an audit of the business and the same number is applicable, they may continue with statement preparation and filing
The given notification asserts that the amendments and relevant changes have been done in the GSTR 9 and GSTR 9C which is given in the Notification No. 56/2019 dated 14.11.2019. Also, the said changes will be reflected in the application software and the offline tools by 21st Dec. 2019.
Significance of GSTR 9C Audit Form
GSTR-9C is a reconciliation statement which must be certified by a Chartered Accountant or a CMA. Taxpayers whose aggregate turnover in a financial year exceeds Rs 2 Crores need to file GSTR-9C. The GSTR-9C must be digitally signed by the GST Auditor and must report all discrepancies or liabilities in filing any of the GST returns during the financial year. All additional liabilities arising out of the reconciliation exercise and GST audit must be reported and certified by a CS in GSTR-9C. The GSTR-9c is the only yardstick or indicator for GST Authorities to measure the correctness of GST returns filed by taxpayers during a given financial year.

Due Date Extension for Filing GSTR 9C Audit Form Under GST?
Once again, the Indian government has extended the due date of GSTR 9C (Reconciliation Statement) form for the FY 2018-19:

GSTR 9C Audit Form Penalty Norms If Miss the Last Date
As per the penalty provisions of GSTR 9C audit return form, the taxpayer has to pay Rs. 200 per day as a penalty in which Rs. 100 consist of SGST and Rs. 100 for CGST. Also, it is to be noted that the total penalty cannot exceed 0.50% of the total turnover on which the said penalty is being levied.
Updates in GSTR 9C Reconciliation Form By GST Council 31st Meeting
FORM GSTR-1 & FORM GSTR-3B returns are required to be filed before the filing of FORM GSTR-9 & FORM GSTR-9C
FORM GSTR-9 & FORM GSTR-9C cannot be used for availing ITC
FORM GSTR-9C would include verification by the taxpayer who had uploaded reconciliation statement
Where to Download GSTR 9C Offline Utility?
The government has released the file an annual return form with GSTR 9 which can be filed up by the taxpayers and then uploaded to the portal. The offline utility is given in a zip folder which has to be downloaded:

To download the offline utility for the GSTR 9C first visit the gst.gov.in portal
Opt on the download tab on the main menu
Now click on the offline tools in the option and it will redirect to download page
Click on download option and extract the file
Where to Find GSTR 9C Online Filing Option on Portal?
Also, there is now available GSTR 9C online utility. To start filing the GSTR 9C reconciliation audit report, perform given steps:

First of all, login with username id & password on www.gst.gov.in
After that, the dashboard will open, click on the ‘Annual Return’ tab
Now click on the financial year for the desired period to file the return, click on the FY 2017-18
An option like ‘Initiate e-filing’ will appear on the screen, click on that
But as soon as you will select the filing option, you will be asked for filing GSTR 9 form before you can file reconciliation form. Know more
Items Included While Calculating Turnover for GST Audit:
All taxable supplies, including intra-state and inter-state apart from the ones which attract a reverse charge, will be included.
Supplies involved between two business verticals
Goods or supplies that are sent/received by the job worker on principal to principal basis.
All export/zero-rated supplies
Supplies made by agent/job work on behalf of the principal
All exempt supplies
All taxes apart from the ones covered under GST. For example entertainment tax paid against the sale of tickets
Items Excluded While Calculating Turnover for GST Audit:
All inward supplies against which tax is paid under reverse charge.
All kinds of taxes and cess part of Goods and Service Tax like SGST, CGST or IGST, etc.
Goods that are received back or supplied to a Job Worker
Activities that are not part of goods or services under schedule III of the CGST Act 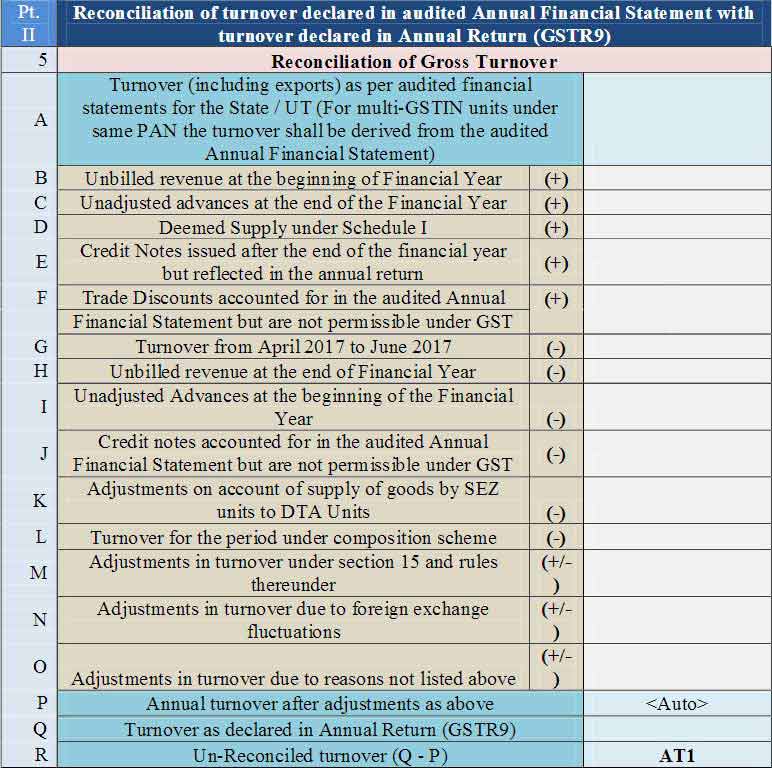 6. Reasons for Un – Reconciled difference in Annual Gross Turnover
Reasons for non-reconciliation between the annual turnover declared in the audited Annual Financial Statement and turnover as declared in the Annual Return (GSTR 9) shall be specified here. 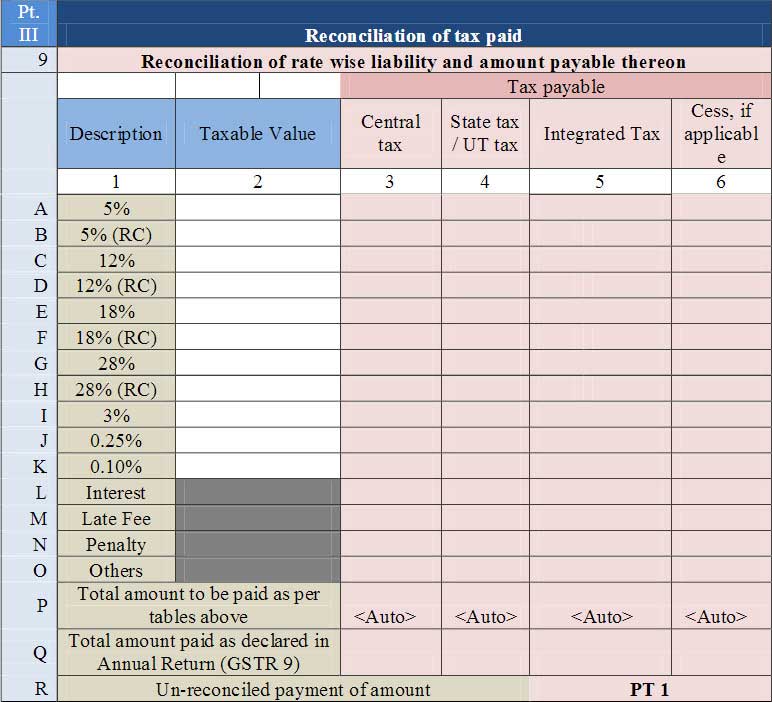 Part 5: Auditor’s recommendation on additional Liability due to non-reconciliation

A certification part is also done once after the GSTR 9 audit is conducted by the person responsible for the audit. The form has two major parts including

1 – Certification in cases where the reconciliation statement (Form GSTR 9C) is drawn up by the person who had conducted the audit.

2 – Based on audit the auditor mentioned:

Proper maintenance of books status
Or not maintained

3(A) – Based on any observations done by the auditor, reporting any differences:

5 – All the details and transactional information stated in GSTR form 9C are validated in this point.

Credentials With Signature, Name of the signatory, Membership no. and Date