Please mail your bid to topcafirms@gmail.com if you want to buy and operate TopCAfirms portal

The Central Board of Indirect Taxes and Customs, vide notification no. 49/2018 – Central Tax dated 13th September, 2018, has provided the format of FORM GSTR – 9C.

2. Point No. 10 – Reasons for un-reconciled payment of amount;

3. Point No. 11 – Additional amount payable but not paid (due to reasons specified under Table 10).

POINT NO. 9 – RECONCILIATION OF RATE WISE LIABILITY AND THE AMOUNT PAYABLE THEREON –

This section provides for the reconciliation of tax paid as per reconciliation statement and the amount of tax paid as declared in the annual return filed in form GSTR – 9. Details of rate-wise bifurcation of taxable value and central tax, state /UT tax, integrated tax and cess needs to be provided. The format of point no. 9 is reproduced hereunder –

Further under point no. B, D, F and H mentioned as 5% (RC), 12% (RC), 18% (RC) and 28% (RC), respectively, rate wise bifurcation of supplies under which tax is payable by the receiver on reverse charge basis needs to be provided.

Point No. P is total of point no. A to point no. O and the same is auto generated.

Under point no. Q total amount of tax paid as the same being declared in the annual GSTR-9 return needs to be mentioned here. Figures from table 9, 10 and 11 of GSTR-9 would be reflected here.

POINT NO. 10 – REASONS FOR UN-RECONCILED PAYMENT OF AMOUNT –

POINT NO. 11 – ADDITIONAL AMOUNT PAYABLE BUT NOT PAID (DUE TO REASONS SPECIFIED UNDER TABLE 10) –

1. What is GSTR-9C?
GSTR-9C is a statement of reconciliation between:

the Annual returns in GSTR-9 filed for an FY, first being 2017-18 and
the figures as per Audited Annual Financial statements of the taxpayer.
It is certified by the CA. It can be considered to be similar to that of a tax audit report furnished under the Income tax act. It will consist of gross and taxable turnover as per the Books reconciled with the respective figures as per the consolidation of all the GST returns for an FY. Hence, any differences arising from this reconciliation exercise will be reported here along with the reasons for the same.

The certified statement shall be issued for every GSTIN. Hence, for a PAN there can be several reports of GSTR-9C.

2. Who must prepare & submit GSTR-9C?
GSTR-9C must be prepared and certified by the Chartered Accountant or Cost Accountant. It must be filed on the GST portal or through facilitation centre by the taxpayer along with other documents such as the copy of the Audited Accounts and Annual returns in GSTR-9.

This statement is applicable to all those taxpayers who must get their Annual Accounts audited under the GST laws. Audit applies to those registered persons whose Annual aggregate turnover exceeds Rs 2 crores in that FY, here being FY 2017-18.

4. What’s the importance of GSTR-9C?
A Chartered accountant or cost accountant must prepare this GST Reconciliation statement. Any differences between the details reported in all the GST returns and the Audited Accounts must be reported by the CA therein with the reasons for the differences. Also, this statement acts as a base for the GST authorities to verify the correctness of the GST returns filed by the taxpayers. This is because the CA has to certify any additional liability arising out of the reconciliation exercise and GST audit in GSTR-9C.

5. What are the contents of the GSTR-9C?
The GSTR-9C consists of two main parts:

Part-A: Reconciliation Statement
The figures in the audited financial statements are at PAN level. Hence, the turnover, Tax paid and ITC earned on a particular GSTIN( or State/UT) must be pulled out from the audited accounts of the organisation as a whole.

The Reconciliation Statement is divided into five parts as follows:

Part-I: Basic details: Consists of FY, GSTIN, Legal Name and Trade Name. The taxpayer must also mention if he is subject to audit under any other law
Part-II: Reconciliation of turnover declared in the Audited Annual Financial Statement with turnover declared in Annual Return (GSTR-9)-
This involves reporting the gross and taxable turnover declared in the Annual return with the Audited Financial Statements. One must note that mostly the Audited Financial statement is at a PAN level. This might require the break up of the audited financial statement at GSTIN level for reporting in GSTR-9C.
Part-III: Reconciliation of tax paid-
This section requires GST rate-wise reporting of the tax liability that arose in FY 2017-18 as per the accounts and paid as reported in the GSTR-9 respectively with the differences thereof. Further, it requires the taxpayers to state the additional liability due to unreconciled differences noticed upon reconciliation.
Part-IV: Reconciliation of Input Tax Credit (ITC)-
This part consists the reconciliation of input tax credit availed and utilised by taxpayers as reported in GSTR-9 and as reported in the Audited Financial Statement. Further, it needs a reporting of Expenses booked as per the Audited Accounts, with a breakup of eligible and ineligible ITC and reconciliation of the eligible ITC with that amount claimed as per GSTR-9. This declaration will be after considering the reversals of ITC claimed, if any.
Part-V: Auditor’s recommendation on additional Liability due to non-reconciliation-
Here, the Auditor must report any tax liability identified through the reconciliation exercise and GST audit, pending for payment by the taxpayer. This can be non-reconciliation of turnover or ITC on account of :

Amount paid for supplies not included in the Annual Returns(GSTR-9)
Erroneous Refund to be paid back
Other Outstanding demands to be settled
Lastly, the instructions to the format of GSTR-9C specifies that an option will be given to taxpayers to settle taxes as recommended by the auditor at the end of the reconciliation statement.

Part-B: Certification
The GSTR-9C can be certified by the same CA who conducted the GST audit or it can be also certified by any other CA who did not conduct the GST Audit for that particular GSTIN.

The difference between both is that in case the CA certifying the GSTR-9C did not conduct the GST audit, he must have based an opinion on the Books of Accounts audited by another CA in the reconciliation statement. The format for certification report will vary depending on who the certifier is. 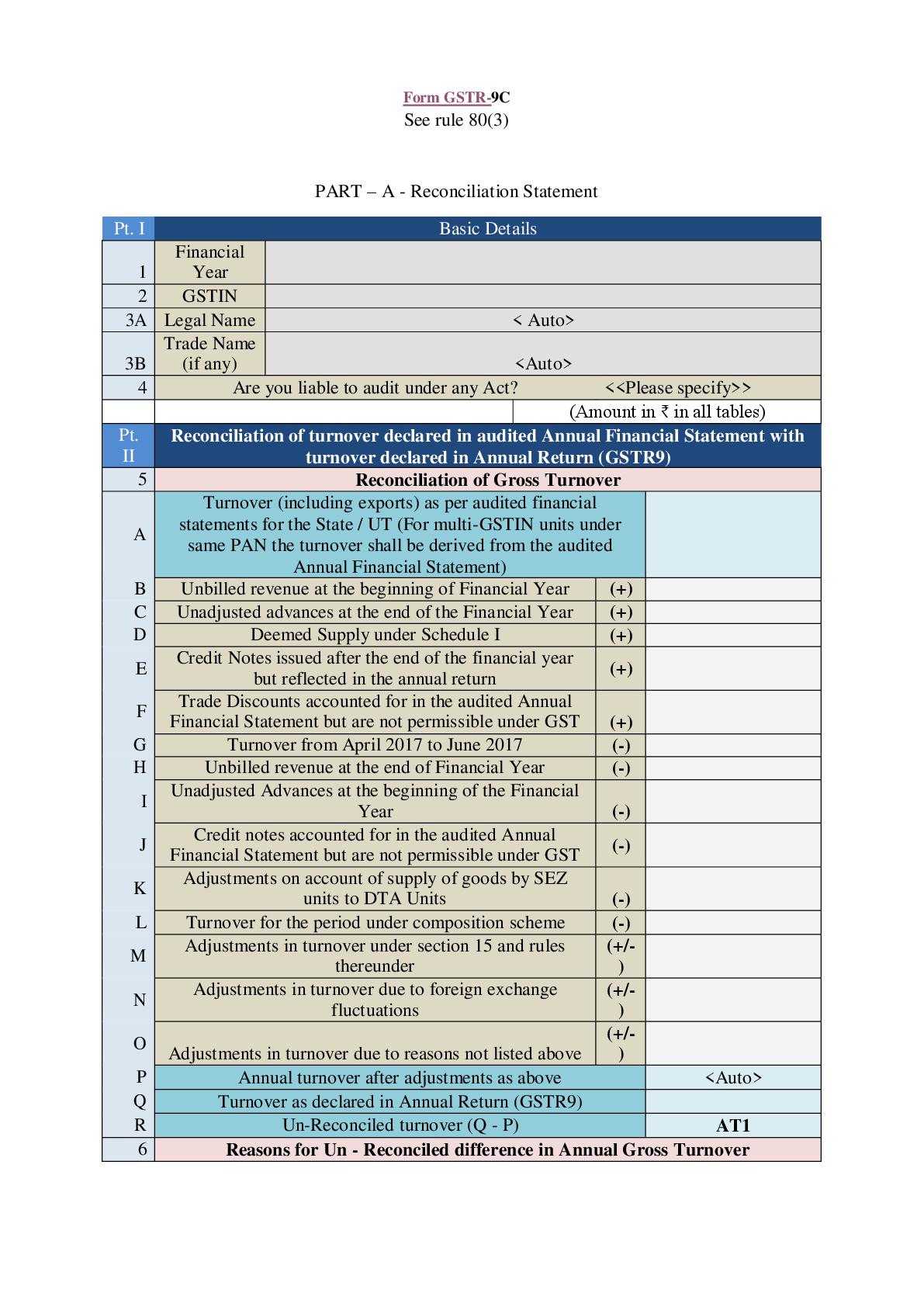 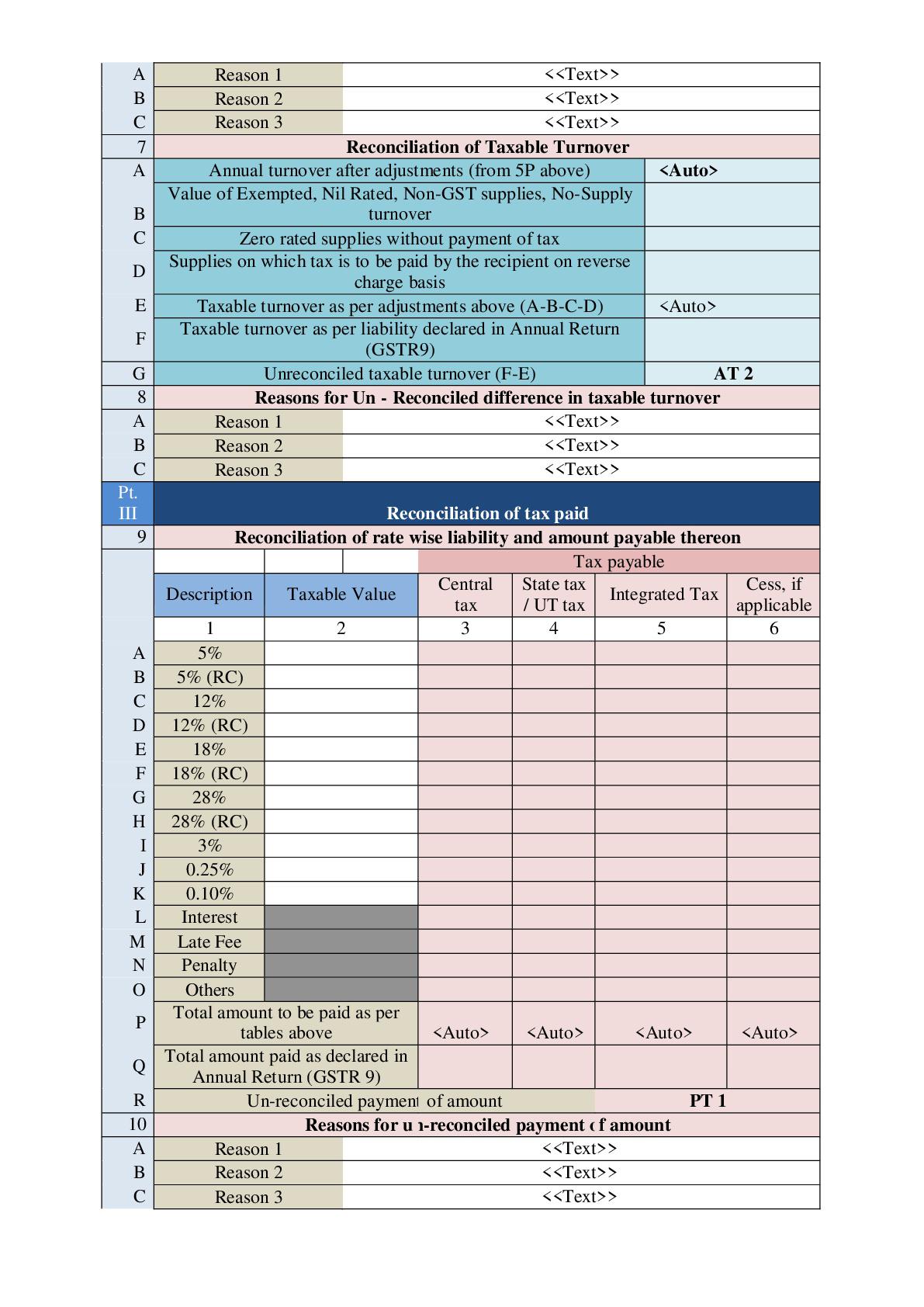 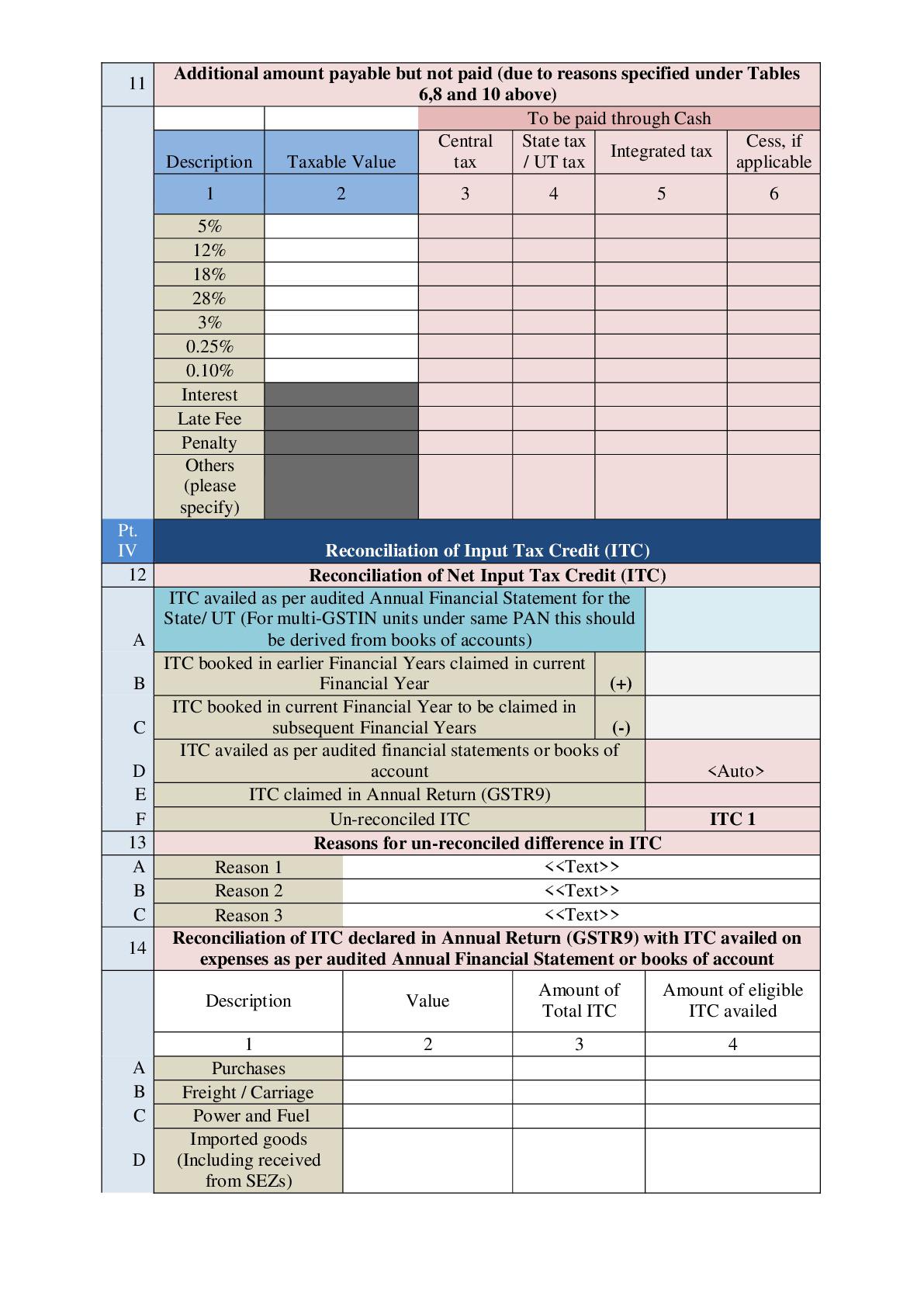 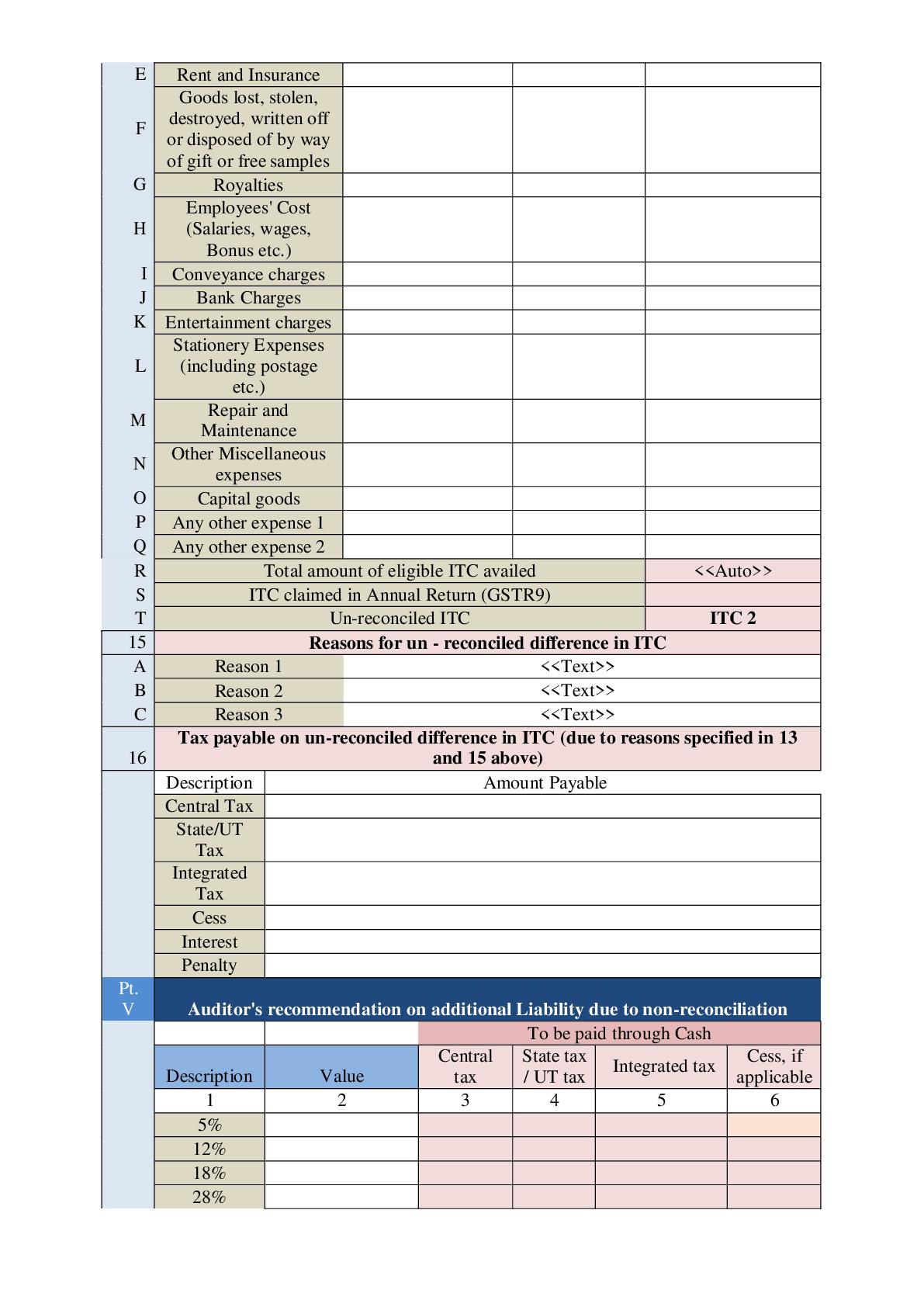 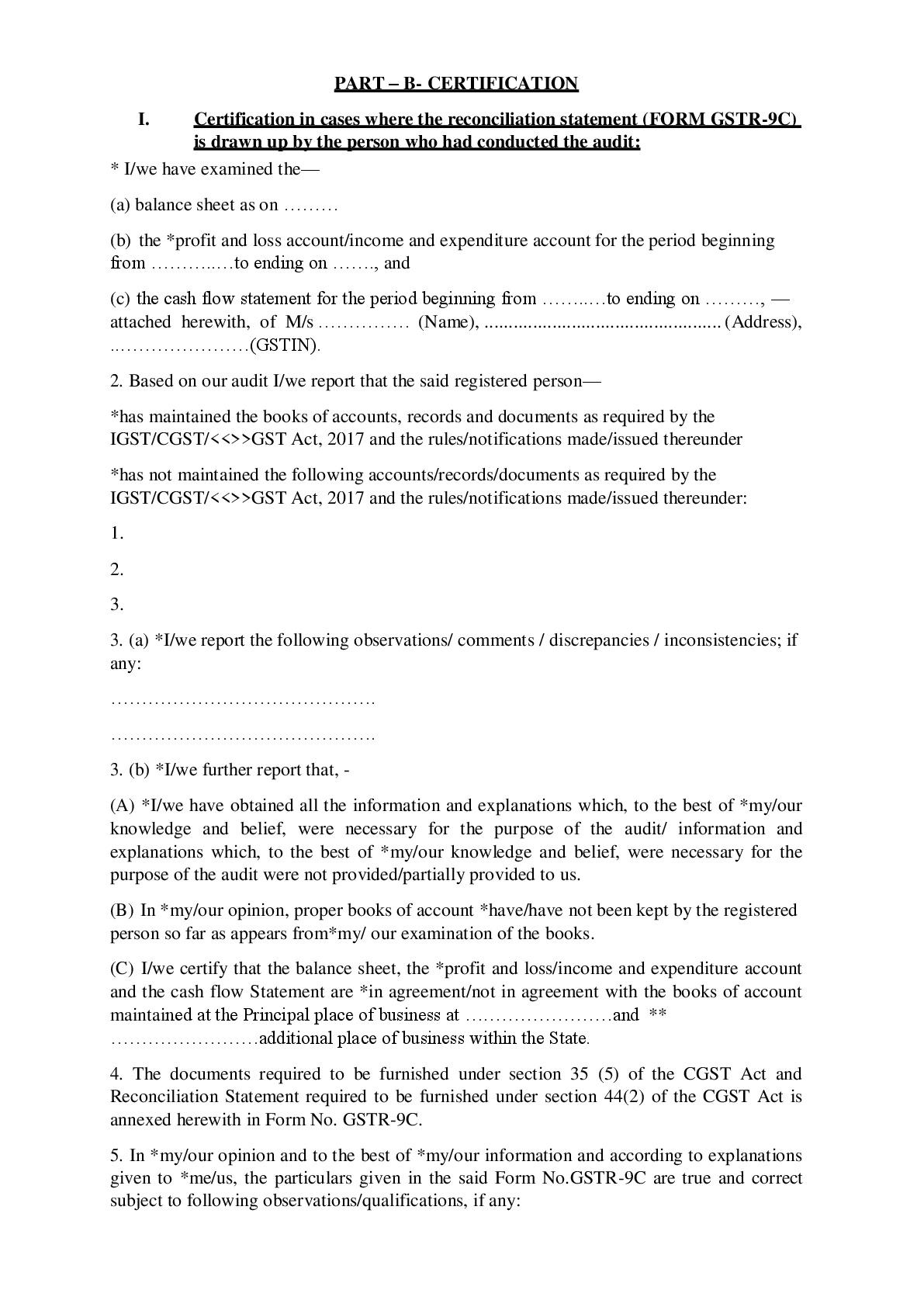 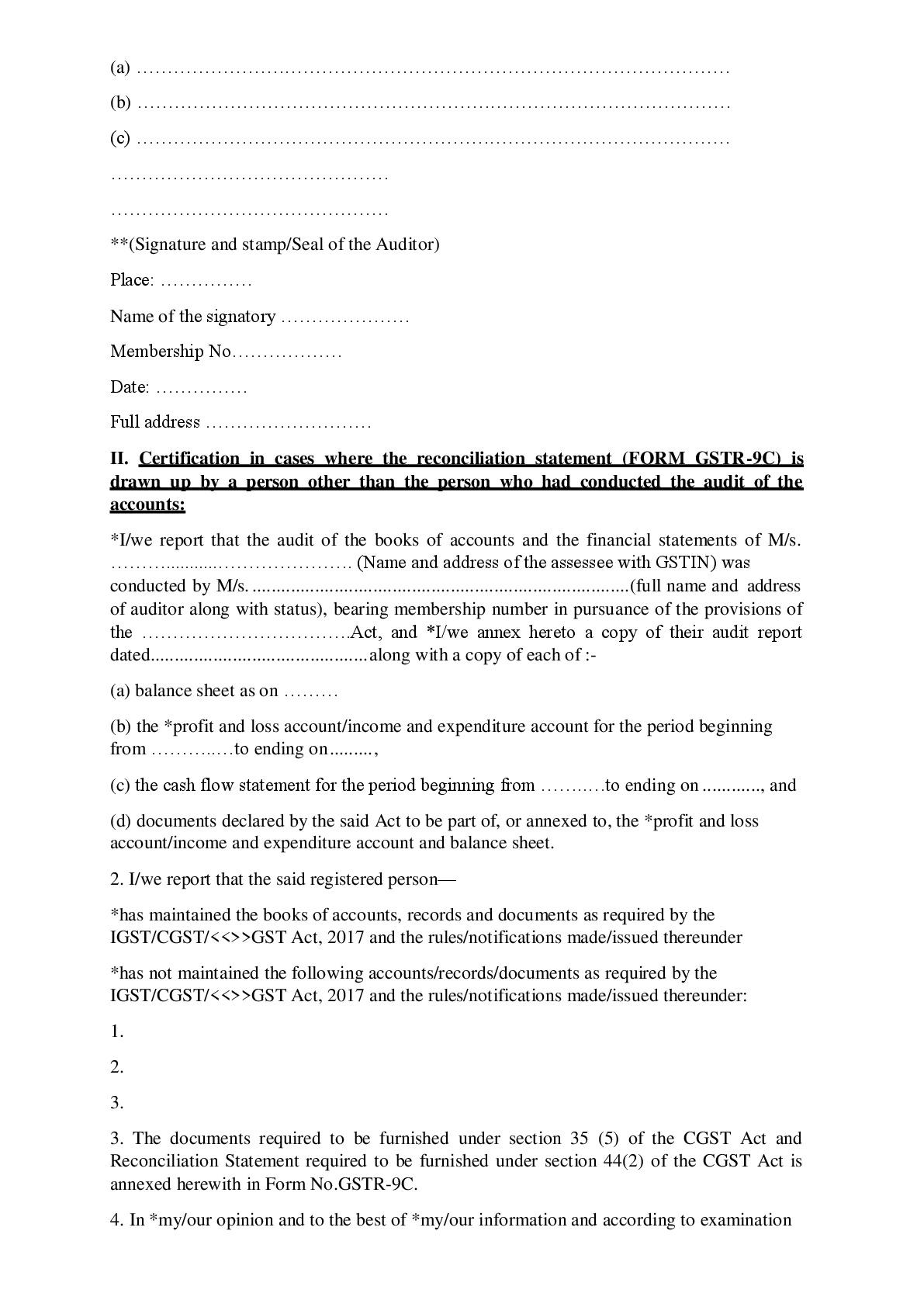 Buy on PrerakDeziners.com  | Buy on Amazon.in  |  Buy on Flipkart.com